Nepal, known for the highest mountains in the world, is one of the most splendid and fascinating, yet still one of the poorest countries in the world. The national economy is primarily geared towards agriculture, trade and increasingly also on tourism.

The opportunities for the population are very limited. Advancement of the infrastructure is urgently required. The rural areas lack the essentials, such as drinking water, food, work, schools and medical care. Many countries support Nepal with material and financial aid in order to realise road building, hydroelectric projects or health programmes, but in particular to also improve the education system.

The fact that there is a great need for action is shown by figures, such as the 55% rate of illiteracy and that there are only around 3.5 students per 1000 inhabitants. Besides state aid, many private aid initiatives are also necessary to improve the infrastructure and therefore the lives of people in Nepal.

Children aged between 7 and 15 attend a primary school if at all possible. Due to the extreme weather conditions and a lack of roads, it often impossible for children living in remote and inaccessible regions to get to school the whole year round, however. Journeys on foot of 3 or 4 hours are not out of the ordinary. Colleges or universities are only found in the big cities. In order to attend, children have to leave their families at an early age, but this is usually impossible anyway for financial reasons. To at least ensure a basic education, it is therefore necessary to preserve and modernise the existing schools in the villages or even to build new schools. 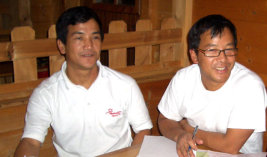 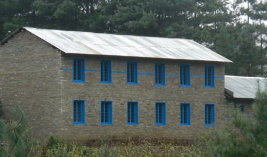 On the initiative of the Nepalese brothers Ngawang Passang and Kaji Sherpa, who have worked in Austria during the winter months for many years, sponsors were sought with enormous commitment for constructing a new school in their home village of Gorakhani in the southern Everest region. There are no access roads to this village, only footpaths. And it paid off!

The new school was constructed between May 2011 and October 2011 - i.e. in just half a year - with the simplest means and almost exclusively with manual work and only a little help from machines. The majority of the village inhabitants contributes to a project of this kind with some sort of work. Wood, tools, windows, paint, locks and other manufactured furnishings, including those for the school rooms themselves, had to be arduously hauled up to the village for hours with pack animals or carriers.

This school building project was financed by the Rotary Club Salzburg, the fairtrade shop 'Weltladen' in Laufen, Germany, Albert Gerhardter in Schladming, Austria, the Gorakhani Welfare Society in Nepal and the company W&H. The overall budget for the project was around € 35,000. Following the building work last year, the school was also supported financially in 2012 with the construction of a simple, self-sufficient energy supply system to equip the school library and for purchasing musical instruments.

Many thanks for this invaluable support

Kaji Sherpa and Ngawang Passang, two really endearing Nepalese, who incidentally were also presented by the Austrian newspapers as excellent cooks around two years ago, would like to once more express their sincerest thanks to all the sponsors, especially Mr. Malata, for this valuable support. You have to experience Kaji's and Passang's joy and gratitude as a result of this school project.

It is a small, but exemplary contribution towards giving many children in this village and the surrounding the opportunity of receiving school education and a better future.